Every now and then, a discussion appears on the internet, which contradicts opinions about some new bicycle tech on the market, usually about what is better and what isn’t. The question about having tapered steerer over the straight one, and its benefits, certainly isn’t new, but the discussion is still going on. Most generations that have ridden mountain bikes from 10 years ago and before, still have some doubts about tapered steerers’ necessity.

What is a Tapered Steerer?

Tapered steerer means diameter tapers from 1-1/8″ on top to 1.5″ on the bottom, rather than a conventional steerer, which is 1-1/8″ in diameter all along.

How Did Tapered Steerers Come to Be?

It’s been a while since tapered steerers became a standard on any decent new mountain bike. What may surprise you is that tapered steerers come from road bicycles. That’s where the carbon first appeared, and in the beginning, the carbon was of low quality. Tapered steerers helped that poor carbon quality be resistant enough for use in road cycling.

Up to this day, there are many excellent used bikes with headsets for straight steerers that are prevented from getting a decent choice for a new fork. Manufacturers started to exclude straight steerers from most of their fork choices.

Is a Tapered Steerer Better?

In my opinion, looking at the benefits of a tapered steerer in mountain biking, it’s probably the best improvement that no one actually was looking for. For once, the new standard on the market wasn’t made so that companies can make more money, but it’s actually better.

Let’s jump into this a bit deeper.

I expect everyone with an older bike to know that fork flutter feel when you wonder if your bike will fall apart. On some forks, it was more evident than others. The feel is the same as fork stanchions having some play in them, so usually, everyone thinks it’s all coming from there. However, most of the time, you won’t realize that flutter is coming from the steerer as well. With semi-integrated headsets, you can see the outer ring of the cup flexing while being pressed in the frame.

It’s rather basic: The fork stanchions and lower legs act as a lever arm extension of the steerer. The lever’s fulcrum (a spot on which a lever pivots) is the lower bearing of a headset. Basically, when you hit the brakes, the front wheel is pushed backward, and the fork’s steerer is trying to tear the lower part of the head tube apart.

Lower legs on good forks go from 32 to 36mm’s in diameter, which is way more than 28.6mm’s that you get on the straight steerer tube. Now let’s take into account that the bigger the diameter is, the better the stiffness is. The steerer will flex way before the lower legs will, and that will put too much stress on the head tube.

But what about fork stanchions?

Fork stanchions are, in some cases, similar to steerer tube in size but made from a stiffer material. There is no way the stanchions will flex that easily, and they shouldn’t.

Now, don’t get me wrong, a logical conclusion from this is that the steerer is supposed to flex more easily than stanchions and lower legs. That’s entirely true, but the point of this discussion is that all the pressure is applied in one spot with straight steerers rather than smoothed out through the whole steerer.

When tapered steerers first appeared, the taper was pretty long. Especially from RockShox, their tapered steerers were 72mm’s long. They proved to keep stiffness at maximum but weren’t appreciated by every bike brand. The problem is, extra-long tapers were preventing manufacturers from creating smaller head tubes to accommodate 29″ wheels without messing up the bike’s geometry.

Luckily, RockShox solved this problem years ago; now, none of the fork brands make tapers longer than 63mm. 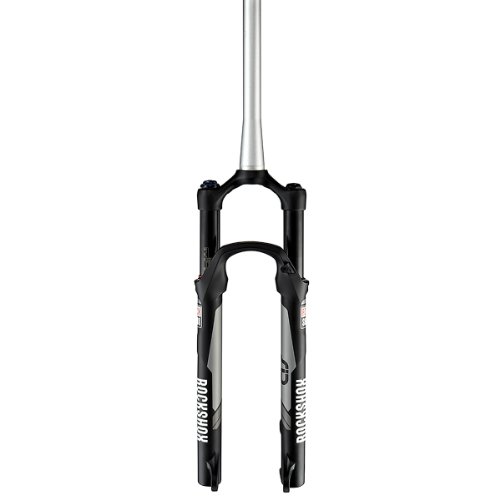 What Happens When Your Bike Headset Gets Loose

The problem associated with straight steerer tubes isn’t only that it has a risk of breaking the head tube. It’s the stretching that happens while flexing like a lever in one spot.

When a tapered steerer flexes, it does by a much smaller degree and equally spread through its length. The pressure applied is almost always one-directional. Meaning the lower and upper part of the headset are both pushed in the same direction by the steerer.

The flexing causes the upper headset to be pushed upward on straight steerers while the steerer moves the lower headset downward. That tends to loosen the headset often, which increases the likelihood of headset and head tube damage.

This process is, even more, sped up by bearing wearing out much quicker. Putting pressure in two opposite directions is effectively doubling the pressure bearings are put through.

How come straight steerers weren’t the problem before?

I’ve seen this question in several forums where the discussion about this was raging on. The thing is, it was a problem, just not big enough for everyone to notice.

When riding became more technical and more aggressive during the years, head tubes started breaking more often. We, bike mechanics, know this very well; I’ve seen it often back in the old days. These days I can’t remember when was the last time I’ve seen someone break the head tube.

Breaking head tubes would be an even more noticeable problem if tapered steerers didn’t closely follow this obsession with making bikes lighter and materials thinner. Otherwise, we would see head tubes break even more.

Over the last three years, there was a massive spike in the interest in rigid mountain bikes. I never actually tried, not that good of a mountain biker, to risk going on trails without the help of a suspension. I’m guessing people wanted something new but old fashioned.

The thing is, bikes were never ridden this way before. When there were rigid mountain bikes, mountain biking itself looked quite different. Much less technical and jumpy, and more of a flowing riding, which puts much less stress on the bike and its rider.

Nowadays, tapered steerers are to thank for that lightweight aluminum rigid fork bikes can be ridden on your average mountain bike trail. Not nearly as fast as a suspension mountain bike, but at least it won’t break after hitting gnarly terrain and an occasional jump.

Tapered steerer tubes place the required structure where a mountain biker needs it the most. That is essentially the biggest reason why I don’t tighten headsets on my mountain bikes anymore. Tapered steerer changes the way the whole headset flexes and goes through while riding aggressive technical terrain and braking heavily. Strength, stiffness, and durability where you want and especially need it.

When these first arrived on the market, I immediately knew this was a significant change. First, ride, and I was already sure that tapered steerers weren’t just something to throw money on, but a significant advancement that allows manufacturers to build much more capable mountain bikes.