Having squishy brakes is quite scary. I always kept worrying about what if this happens when I’m riding downhill on a trail. Luckily, that’s close to impossible to happen unless you cut the hydraulic brake hose on something. Which again, I don’t recall ever seeing it happen on a trail ever.

A problem often happens, and it’s related to placing a bike upside down or vertically on a wall hook. However, it’s far from a thing for you to worry about, which I will explain in detail later in the text. Basically, it’s a normal thing to happen for bicycle hydraulic brakes as the design allows this while being beneficial in many other ways. Let’s go into details!

Is it bad to put a bike with hydraulic disc brakes upside down?

It is bad to put hydraulic disc brakes upside down. The air gets inside the brake lever’s oil reservoir as brake pads gradually wear out and pistons move out to account for that added space. When the bike is upside down, air bubbles can travel to the rest of the system, reducing braking power.

How do Bike Hydraulic Brakes work?

Bicycle hydraulic disc brakes consist of three main parts; brake lever, hydraulic hose, and brake caliper. There needs to be a braking fluid for this system to work, which is always an incompressible oil. The brake lever uses a cylinder to push the oil when the lever is pressed. The oil pressure is transferred through the hydraulic hose to the other end, pushing two or more pistons in the brake caliper. Pistons, in turn, push the brake pads to create friction on the rotor and provide stopping power to the bike.

Some bicycle hydraulic brakes use mineral oil, rather than some variant of a generally used dot oil. There are no too big great forces or too high amounts of heat generated while stopping a bicycle. 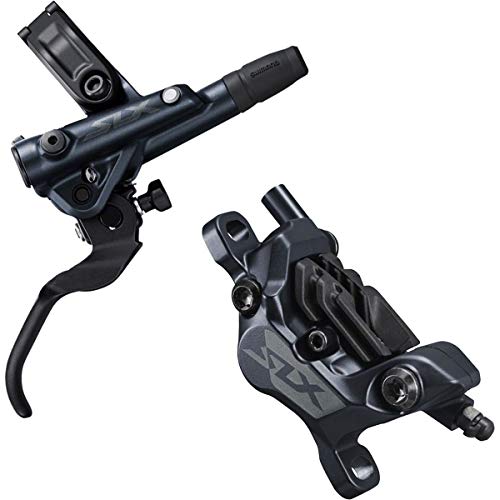 How does Air get Inside a Hydraulic Disc Brake?

Bicycle hydraulic disc brakes are not closed systems. One of their most important features is that the pistons automatically move out as brake pads wear out. This prevents the travel on the brake lever from increasing and, in turn, diminishing braking power.

While this is happening, the brake caliper stores more fluid in the space that the pistons previously occupied. The brake lever has a reservoir that holds extra braking fluid that doesn’t interact with the system while braking. When you squeeze the lever, the cylinder pushes the oil and closes the hole between the system and the reservoir. At this point, the system is temporarily closed. However, when you release the lever, fluid and air can move between the master cylinder and the reservoir.

As brake pads gradually wear out and oil from the reservoir comes into the system to fill the added space from pistons moving out on the other end, the reservoir gets partially filled with air. That air never interacts with the system because it’s always on top of the reservoir. Unless, of course, there isn’t enough oil to begin with. Nowadays, manufacturers tend to leave reservoirs half empty.

The problem appears when the bike is inverted. Air can move from the reservoir into the rest of the braking system because now it gets where the inlet hole of the reservoir is. As air is highly compressible, the brakes won’t work correctly. They might be squishy and produce much less braking power, or the lever can lose its “biting point” altogether, and you won’t be able to stop the bike at all.

Luckily, the hole which connects the reservoir and the system is tiny enough so that the air won’t go into the system quickly when upside down. Usually, it requires squeezing the lever a few times to force some of the fluid from the system and let the air in.

Can You Hang A Bike With Hydraulic Brakes Upside Down?

You can probably conclude from what I’ve mentioned in the previous section that hanging a bike with hydraulic brakes upside down isn’t the best idea. In reality, nothing really happens for short periods of time if you don’t squeeze the brake lever. For example, storing a bike on some upside-down ceiling mount is not recommended because of how long the bike could stay like that, but placing it upside down on the ground for a quick tube change or a tune-up won’t result in anything bad happening.

There are ways to prevent having air in the system completely, and I will talk about it later in the text.

Hanging the bike with hydraulic disc brakes vertically is a bit different. Since the brakes won’t be complete upside down but rather somewhat at a half-point, there is very little chance for air to get inside the system. It happens only on worn-out pads where the reservoir is mostly filled with air, and even then, it requires squeezing on the brake lever a few times.

I’ve tested this with different oil levels in the reservoir, and for the most part, I couldn’t get the air in the system because the oil was still covering the intake hole.

You will see bike shops hanging bikes like this all the time because all they have to do is avoid squeezing brake levers. How to Prevent Air In Hydraulic Brakes

Most people will tell you that you need to bleed your brakes. But unless it happens in normal brake use, there isn’t any more air than it should be. If you did proper bleeding, you would find no room for oil at all and most likely no air coming out. And if, on the other hand, you would bleed the brakes with the worn-out pads still on the bike, then by default, you would have more oil in the system than it was intended.

At that point, it would prevent this problem from happening, but once you swap your worn-out pads for new ones, you wouldn’t be able to push pistons back in completely. This results in being unable to adjust the brake caliper. To push pistons completely in, you would need to open the oil cap on the lever and let some oil drip out while pushing pistons back in.

I like to do this on my own bike because I know exactly how it works and what I need to do when swapping for new brake pads. This will prevent your brakes from ever becoming squishy even if the bike is always upside down.

However, in reality, it’s the wrong thing to do. That’s why bleeding is always performed by removing the brake pads and inserting a bleed block that holds pistons completely retracted so that you can’t put more oil in the reservoir than you are supposed to.

How to Quickly Fix Brakes Going Squishy if Placed Upside Down

So imagine you are somewhere you don’t have your brake fluid, tools, nor a bike shop to help you, and your brakes go squishy from placing your bike upside down. It can happen during the transport of your bike to the trail and back, for example. Lucky for you, in those short periods of time, air bubbles from the reservoir didn’t reach the caliper yet. Most likely, they just entered the hydraulic hose.

To fix the brake, all you need to do is put your bike in an upright position and make sure the brake hose is as vertical as it can be up to the handle. That way, the gravity will push them back to the brake lever, and then you squeeze the brake lever multiple times to force the oil down the system while air bubbles go up. Keep doing this until you feel the brake becoming stiffer, which means air is coming back to the reservoir.

Sometimes, a slow squeeze with a quick lever release works the best. I’ve always done it in several tries, so it shouldn’t take long.

Once this is done, you don’t have to worry anymore because as long as the bike is in an upright position, the air can’t go back. You can ride without worrying that suddenly your brakes will stop working.

I think we can agree that putting hydraulic disc brakes upside down isn’t such a good idea. It is okay for short repairs if you are careful not to squeeze the brake lever. Other than that, it’s only safe if you are completely sure there is no air in the reservoir.

Bleeding regularly is an excellent idea, but you need to either bleed it properly or remove excess oil when swapping for new brake pads.

If you are looking to store the bike for a longer time, a vertical stand that holds a bike by one wheel is far better because this problem doesn’t happen unless there is really a lot of air in the brake handle’s reservoir.

If this problem happens anyway, there is an easy fix by squeezing the brake lever multiple times in an upright position to extract air bubbles from the system into the reservoir, and it works 99 percent of the time.