We love providing our readers with top-notch, practical maintenance advice. One of the larger scale maintenance tasks is to install disc brakes. I always liked asking pro cyclers for advice about components, until I realized I don’t get good advice from them. Not because they don’t give good advice but because I’m not a pro cycler and that advice might not apply to me at all. Since road cycling was never my area of expertise I decided to invest some time into testing stuff on my own.

All this rage about having disc brakes on a road bike or not was fascinating because all I’ve seen in this debate is two non-objective sides arguing over different objectives of their road cycling activities.

The question that appears is “Why would you want to install disc brakes on a road bike?“.

Pretty much every road cyclist I asked, apart from the younger generation, always had the same answer, complaining about the added weight while getting braking power which isn’t essential. Now, I’ve never tried racing but I’ve taken my road cycling to some extreme extents and efforts. This made me understand the point pros are making about rotors on road bikes. However, it also made me understand how foolish it is to not adapt the question to your own needs?

The real question for an average cycler is “Do I get anything by not having disc brakes on a road bike as a recreational cyclist?“. That’s a proper counterpoint to ask.

Let’s see what pro cyclists had to say about this question.

I specifically asked people I don’t generally hang with, just to be sure they won’t try and agree with my point out of friendship. The explanation I got from pretty much everyone is that disc brakes won’t give them anything if they are simply trying to win a race. That few hundred grams less, even it seemed unimportant compared to the added weight of a bike and a rider together can really make a difference when you have a group of equally good cyclers trying to win a race. However, for people that are not racing this <0.01% speed you get by not having disc brakes is completely irrelevant. On the other hand, you gain more than a 100% increase in braking power.

For me, the answer is simple because I know my goals are not winning races.

I’ve already gone too far out of topic, but this article is directly related to this story I’m telling. What proceeded is my wish to convert an old road bike of my to have disc brakes. This frame didn’t have attachments for disc brakes and that meant I had to search for a solution in depths of cycling forums.

I’ve seen some frames and forks with rim brakes that actually had attachments for disc brakes from the factory. Everyone always pointed out that it’s a great thing to have but I’m quite sure no one ever bought those for that reason. Saying this, because a friend of mine actually had this and never noticed until I pointed it out once. You might have it on your road bike without knowing.

For all the other non-disc frames, there is really no attachment point for disc brakes unless you can mount some kind of adaptor. I’ve experimented a lot with adaptors and there are limits on adaptations with each and every one. Especially the more expensive ones as they are usually made for specific frames and forks.

In the end, I ended up using a TOUHIA 0.87in/22mm Ring Dia Bicycle Disc Brake Bracket from Amazon. It’s among the cheapest, but it’s effective in most cases. Just to say it won’t fit curved forks as all. For these, you would have to find some custom made solutions. I’d go with the same design as this just make it longer and properly curved for these types of forks. On straight forks, it worked every time I’ve seen it. It becomes tricky on carbon ones though, requires constant checking on the tightness and I wouldn’t recommend it in the long run.

On the rear end, it works really well. It’s easy to fit on almost any frame because rear ends on frames, especially older ones, are usually designed the same way. One side locks with the axle while the other locks onto the frame itself. Again, I wouldn’t really recommend it on carbon frames.

In one case I had to bend one end of the adaptor a bit because the part that is locked on the axle or quick release on the outside must fit flat. Otherwise, it won’t stay firm enough and might damage the frame or the axle.

When you fit it on the frame, you essentially get an IS disc brake mount. Now all you need is a IS mount adaptor for disc brake. Disc Brake Caliper Mount Adapter is/Post Front 160/180/203mm Rear 140/160/180mm is what I’m usually getting because there are all the options available in one place. They are different for front and back for the same rotor size, so check exactly which one you need. Once you got it you can mount a disc brake on it directly. 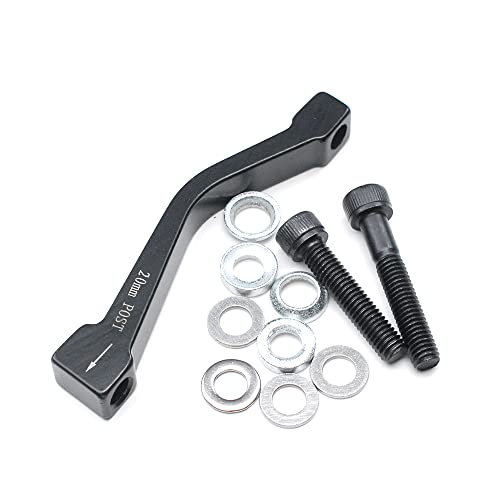 Several problems that occurred to me during installations is that sometimes it’s not exactly in the right place vertically. I fixed this by adding some small spacers between the IS adaptor and disc brake itself. If it’s too high already you might need to grind some material off the IS mount, which is luckily not an expensive part if you mess it up.

The horizontal alignment was much easier to achieve. Most disc brakes give you a lot of room to adjust them left or right. If they don’t then you can use spacers again between TOUHIA 0.87in/22mm Ring Dia Bicycle Disc Brake Bracket and IS disc brake mount. 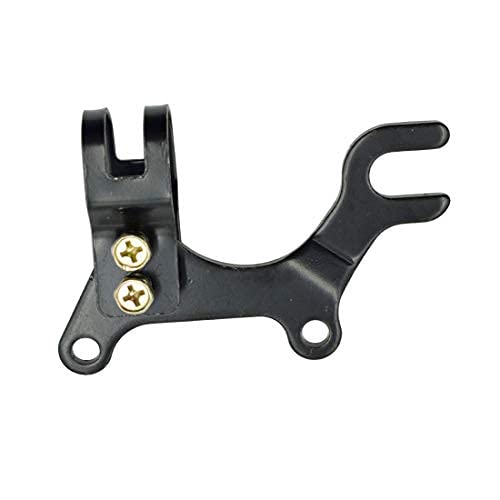 Can You Fit This Non-Disc Brake Adaptor On Mountain Bikes?

Most certainly you can!

It might be a bit more difficult on the suspension fork because of its thickness but you can always find a bigger clamp for it. For the rear brake, it should fit quite nicely. What’s great for mountain bikes is that MTB wheels for disc brakes are usually much cheaper and have way more options.

Will It Ever Perform As Well As Disc Brake Frames?

Not because it’s as good of a solution as disc brake frame would be, but because braking power and quality aren’t really affected by the stiffness of the mount. It relies on the quality of the brake itself. However, what won’t work as good is the constant readjustment you might have to make. When I say constant I don’t mean like after every ride but from time to time it gets a bit bent or moves out of alignment because the attachment gets a bit loose.

All it requires is a 1-minute check and sometimes adjustment every now and then. But, you should check on things from time to time anyway so that shouldn’t be anything new.