A lot has changed in the mountain biking world in recent years. The MTB cassette is becoming wider and wider with more gears, almost every year. While most people are simply switching to new bikes which are already adapted to new drivetrains, some of us are keen on keeping our old bikes with which we share memories. Upgrading them with new parts is the key to make them up to date in performance but it can be tricky to find out which parts fit and which don’t.

Can you put an 11-speed MTB cassette on a 10-speed freehub?

Yes, you can. All mountain bike cassettes are made to fit standard HG freehub. 8, 9, 10, 11 and 12-speed cassettes for Shimano splined freehubs. Unless you have some older cassette that is using a road bike standard which requires bigger freehub for 11-speed adaptation.

Why Upgrade From 10-speed to 11-speed MTB Cassette?

The first reason that comes to mind is going for a one by drivetrain, even though one by is more associated with 12-speed in these days. There are 10-speed clutch rear derailleurs that allow you to go 1×10 with bigger cassette range, I feel like the 10-speed cassettes are often unable to give you a proper gear range. Even if they give you something like 11-40+ teeth range, it’s still not good enough. These will, however, offer a simplified drivetrain that weighs much less. Simplified shifting is something that’s completely underrated in my opinion. Out there on a trail, you don’t want to think about gears or have to adjust two derailleurs to get that sweet spot, you just want to push your bike as hard as you can.

Keeping the Gear Range With 1x

Some manufacturers, like Sunrace, made a 10-speed 11-46 cassette as a solution to a reduced gear range. With it, you don’t need to put a smaller front chainring to have climbing gears, but instead, keep 30-32 teeth and have both climbing and fast riding gears. However, then we have a new issue, gear spacing. Most riders will find it hard to have enough close gears in between to keep their comfort level and pedal efficiency.

Keeping the Gear Spacing With 1x

All of the problems I mentioned above stop with 11 and 12-speed cassettes. That’s why upgrading from a 10-speed to 11/12-speed is so important. Not to mention, that it’s a future proof solution because every higher quality drivetrain is going 11+ speed now. Upgrading, later on, will be so much easier.

11-speed cassettes have that one more cog to better spread the teeth ratio for those high range cassettes. Some of these go even further in gear range with the biggest cog having 50 teeth. These efforts to mimic 12-speed cassettes are quite nice if you ask me, as long as you find an 11-speed derailleur that can properly cover a 50 teeth cog.

12-speed cassettes go even further in gear spacing, but they are a category of its own. An 11-speed cassette will be more than enough for an average rider, however, I would still go all-in on this and move to 12-speed right away since everything is getting adapted to that anyway. You will have a much easier time finding components and replacements.

Just to be clear before I talk about any details, MTB tech developed separately from a road cycling tech. Therefore not all of the dimensions, fitting, specifications, and results gained from bigger cassettes apply to both MTB and road cycling.

People often get confused by this, mostly because article or forum topics don’t often clearly specify if they are talking about one or the other.

A quick answer for people wondering why things are so much different for these two categories is that a need for bigger cassettes developed at a different time as well as for similar but still quite different reasons. Therefore, to accommodate the needs for more gears in the back as easily and efficiently, they ended up with different standards.

Unlike MTB cassettes which all fit on the same freehub, including the Sram’s 12 speed 11-50 Nx Eagle cassette, road biking cassettes require a longer freehub with 35mm splines for 11-speed+ cassettes. 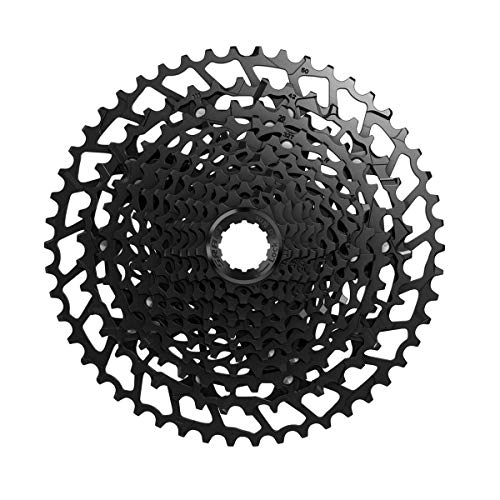 Shimano set a standard for their spline system freehubs. All newer freehubs fit 11-speed cassettes by default. That is because they made their MTB cassettes so that the extra cogs are fitted on the side of the wheel, usually bolted on the 2nd cog so the cassette fits the same way as 10-speed. 12-speed cassettes for Shimano freehubs fit two of those cogs in the same way. This is possible because on MTB wheels spokes are at an angle on the drive side and there is enough space for an extra bigger cog that won’t hit them.

However, on road bikes, 11-speed cassettes are bigger than 8, 9, 10-speed cassettes and as I’ve already mentioned they require a 35mm freehub. 8, 9, and 10-speed cassettes require a 1.85mm original Shimano spacer to be added behind the biggest cog if you are using that road bike freehub which is confusingly sometimes referred to as 11-speed freehub. Usually, that confusing name makes mountain bikers think their 33mm splined Shimano freehub can’t fit 11-speed cassettes. The reason why the same adaptation can’t be made for road bikes is that spokes on a road wheel are more vertical on the drive side and there isn’t enough space to put and extra cog on that side so 11-speed road cassettes are wider than 11 and 12-speed MTB cassettes.

At first, some MTB cassettes used the same standard as road cassettes so you can find these longer freehubs on some MTB wheels as well. In this case, you would have to use a spacer to fit any newer MTB cassette. If you have an old cassette that you don’t need anymore, you can take it apart and use one of the spacers that are between the cogs inside. These won’t be exactly 1.85mm thick but most of the time they work.

An SRAM 11-speed and 12-speed cassettes that have a 10-teeth cog require their SRAM specific XD driver. This XD driver can be bought separately with a different mechanism for pretty much every hub brand there is.

10-teeth cog is amazing to have on a one-by drivetrain as that one teeth difference results in 10% more gear range for faster riding. To allow such small cog they had to reinvent how the cassette is fitted on a freehub resulting in new XD drivers.

Shimano did something similar for their new 12-speed cassettes that have one of the biggest ever teeth range with 10-51. (Yes, the effective gear range is bigger than 11-52 cassette by Sunrace) Their Micro Spline freehubs kept the spline system but made it smaller and narrower to fit 10-teeth cogs.

These were important to mention because I’ve seen people not even realizing they are buying cassettes that use different freehub systems. These mistakes can end up being quite costly.

For example, Sram offers a 12-speed cassette for Shimano splined freehub as well. SRAM PG-1230 NX Eagle 12-Speed Cassette Black, 11-50t is a perfect solution if you want an easy switch to 1×12 without changing to XD Driver or Microspline freehub from Shimano. 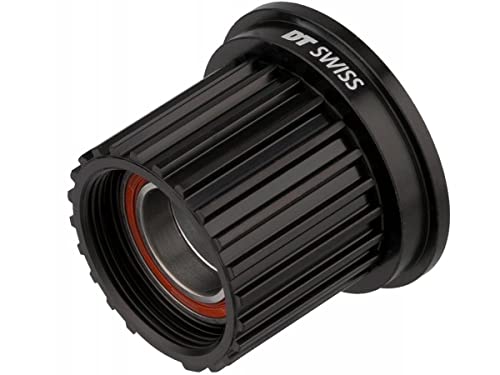 Older 7-speed freehubs are smaller than these 8, 9, 10, 11-speed freehubs. And since they are still in use on cheaper mountain bikes there are some methods to adapt them for bigger cassettes that might be useful to lots of people.

I personally, had this problem when I wanted to convert an old 7-speed bike to 9 or 10-speed cassette. I wasn’t keen on spending 50$ on a new freehub. Not to mention that the way freehub is attached to the hub on my wheels was some old standard that was almost impossible to find on newer freehubs. Since I wanted to keep the original hubs at the time, I was stubborn about keeping them.

How to Adjust Standard Shimano Freehub For 11-Speed Road Cassette

Standard Shimano freehubs are 33-34mm. Now, you may have some older MTB 11-speed cassette that needs a bigger freehub or you simply want to fit a road cassette on it. Believe it or not, gravel bikes are usually best with wider MTB hubs and road biking drivetrain so adaptations are sometimes a tricky thing.

You should check exactly how much you need for it to have 34.95mm of space. There are two ways I usually get those missing millimeters.

Depending on the manufacturer, you can either grind some material from the freehub on the bottom of the splines or grind some from the biggest cog on the cassette. I prefer modifying a freehub because it’s easier to keep the grinding surface level. If it’s not level the cassette won’t be stiff enough and might damage the freehub bearings and attachment bolt. Which can then result in wobbling and gear skipping.

You should be careful about how much space you have from a cassette to the wheel spokes. If the cassette comes too close you might damage them. Although I’ve never seen this problem on a mountain bike, only on road bike wheels.

You can use this method to adapt an older 7-speed freehub in which splines are usually 30-31mm. However, on these hubs there is usually the same problem as road wheels, the spokes are just too close. You should check that first.

How to Change The MTB Cassette

Once the wheel is taken off the bike, you need several tools to do this. You will be glad to have these tools by your side. Not only you can change the cassette but you can take it off the wheel to clean it really well each time you clean your bike.

I prefer to have some great quality tools because I work on bikes all the time. However, since you need 3 tools to change the cassette, greater quality ones end up costing over $100. Luckily, there are cheaper cassette removal sets for an average user on Amazon.